To boldly go where no SQL has gone before

My last post proved quite popular so I am wondering if I can combine a post about IT and Star Trek.

Years ago I used to have lists of Star Trek episodes, which included such information like original air date, production number, episode title and brief description.

One thing that was hard to keep track of was how many episodes were written by a specific person. This is because episodes are written by multiple people. A column called writer would then need to contain multiple people, another option would be to have columns called writer1, writer2 etc. This wouldn’t help either as you wouldn’t know which column a specific writer had been saved in. 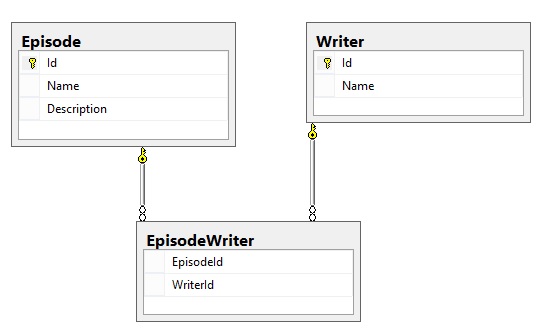 But if Gene Coon and Gene Roddenberry had writing credits on The Cage we would need to add Gene Coon to the writing table and add an extra entry to the episodewriter table.

I am going to do more posts based on this as I expand the database structure to include other information, I may go on to create stored procedures for bringing back certain information or I may use this as an example to talk about coding a user interface.