I thought I might talk about how he encouraged my interest in technology, especially as in about 8 weeks I will become a parent and will have someone to encourage and inspire.

I am going to sound really old but when I was born there was no internet, no mobile phones and computers more often appeared in sci-fi than in your home.

The first computer I remember us owning was a Lynx. A quick google reveals there were a number of different models, I have no idea what we had but here is what I found. 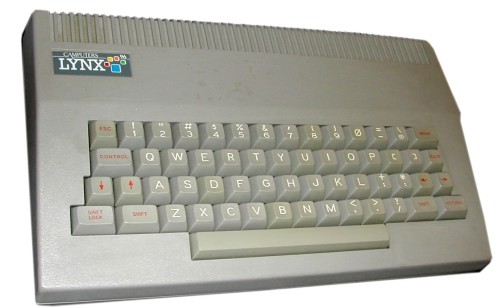 In March 1983 the Lynx 48K was released, in September this was upgraded to 96K. In December 1983 a new Lynx was released with 128K. To put these numbers in perspective on my desktop is an image file that is 123K! The CPU in this computer was rated at between 4 and 6Mhz. (Modern PCs have CPUs around the 1.5Ghz or 1500Mhz)

The Lynx we had, didn’t have a disk drive or a mouse. Programs were loaded from audio tapes (Audio tape was a form of data storage that came before CDs where data was stored on magnetic tape, most often used for music) The tapes we had would often get stuck and data wouldn’t load. The answer to this was to fast-forward/rewind the tape or hit the tape on your leg. For some reason this is a memory I still have of my dad hitting a tape on his leg to get a game or something else to load on the lynx. We also had a joystick for playing some of the games. I believe we also had an early thermal printer.

We had a wide range of games for the Lynx, I can remember Jet Set Willy, and Diggerman. But there were also programs which my father had created. The Lynx had a form of BASIC where you can write you own programs and my father spent many hours writing programs for me and my sister. (We actually never realized this at the time)

With that as my introduction to computers is it any wonder that I do what I do now? Now what should I do for my child to encourage them in a similar way?

As a family we never owned a games console. Not sure if this was a financial or moral choice but it is something I will have to think about. I want my child to be knowledgeable about computers and able to compete in the competitive job market, but I also want them to know about science and nature and to enjoy their childhood. Lots of technology choices to make over the next few years.