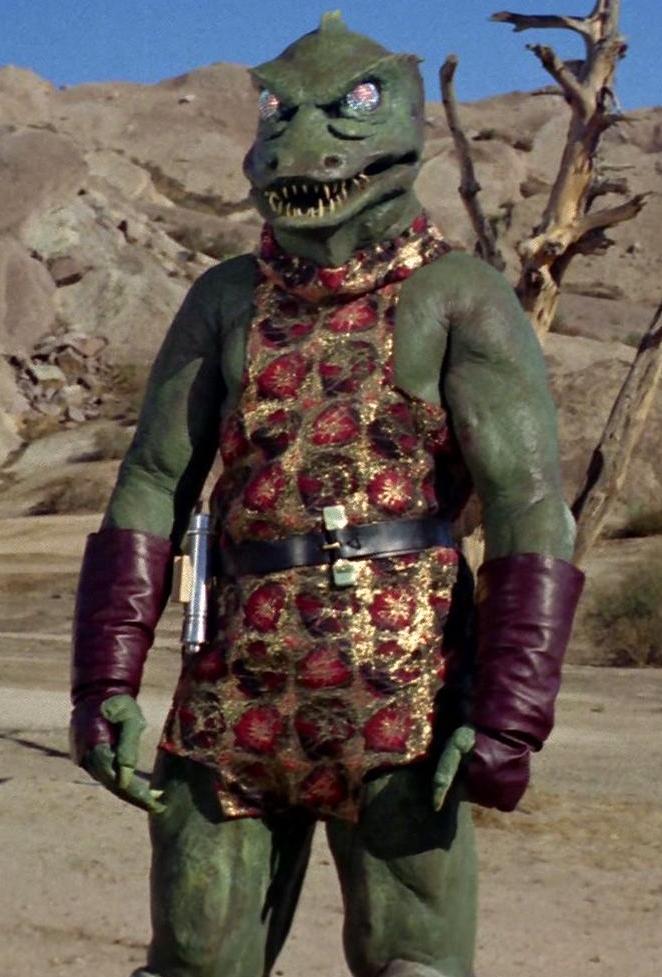 The episode begins with the Enterprise in orbit of Cestus III. Commodore Travers requests a tactical team join the away team. When the away team beam down Cestus III has been destroyed.

Spock detects non-human life signs, obviously the aliens that destroyed the outpost. They attack the Enterprise, stranding the away team who are under heavy fire. Sulu is instructed to do whatever he can to protect the Enterprise and leaves orbit.

Kirk finds the armoury and a grenade launcher, after firing the enemy withdraws.

After beaming back aboard the Enterprise they pursue the unknown enemy into uncharted space. One of the survivors of Cestus III explains that the enemy attacked without warning.

Kirk is determined to destroy the enemy ship before it reaches home and the Enterprise prepares for battle.

Captain Kirk and the enemy captain appear on a desert planet. The enemy is a reptilian like species called the Gorn. The Gorn has superior strength to humans but Kirk manages to escape his first encounter.

The Metrons said that the planet contained materials to allow the building of a weapon, however at first glance Kirk sees nothing that could help him defeat the much strong Gorn captain. He does find some diamonds, too small to be used as a weapon.

Kirk pushes a huge boulder over a cliff onto the Gorn captain, which appears to knock him out, however he survives and Kirk barely escapes. Kirk then finds Sulphur, which triggers a memory.

The Metrons allow the Enterprise to watch the last stages of Kirks struggle. They see Kirk discover Potassium Nitrate. The Gorn accuses the Federation of trespassing into their space.

Kirk starts constructing a weapon using the diamonds, sulphur and potassium nitrate to make a gunpowder explosion to fire the diamonds at the Gorn captain. Just in time he applies a spark to his weapon and his opponent lies defeated. 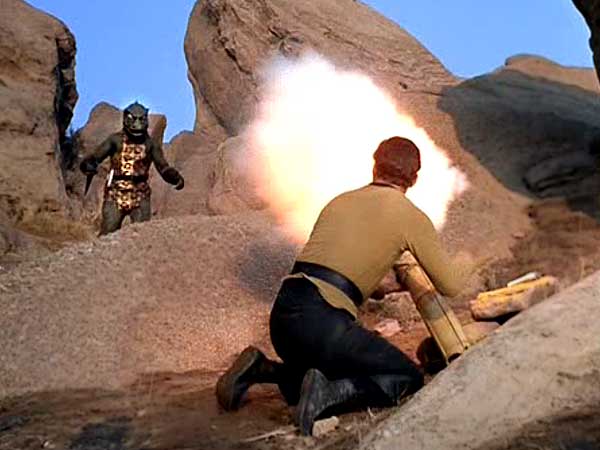 Kirk refused to kill the Gorn captain as they may have been just defending themselves. The Metron announces that Kirk has displayed the advanced trait of mercy and there may be hope for humanity after all.

Thoughts: I like this episode very much. It has some classic Star Trek ideas in it.

We have a super powerful alien race (the Metrons) that think there is hope for humanity.

We have Kirk using raw materials to construct a weapon using simple chemistry.

We have an enemy race that appears destructive but may have just been defending themselves.

We have the classic location of Vasquez Rocks, somewhere that if I ever visit the US I have to visit.

We have the very cheesy Gorn mask, yes its not realistic but the story is strong enough that it doesn’t really matter. Enterprise brought back the Gorn but as a CGI character and I think I may prefer the rubber mask.

Interestingly the weapon Kirk builds would likely not work. The US show MythBusters proved that the bamboo wasn’t strong enough to hold the explosion and the weapon would likely wound Kirk as much as it would wound the Gorn.