Source Code for Game of Life

Last week I blogged about the Game of Life.

Well it took some searching through dead hard drives and old USB storage but I found the program I wrote, and better than that I have figured out how to turn it back into source code.

The file date is November 2004 and the source code has no comments so I don’t know what was going through my head when I wrote it, or even what some of it does. 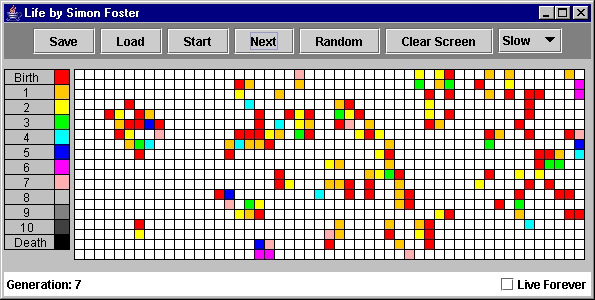 I am actually surprised I was expected the code to be much worse than it was, I am not saying it is good, but I can see more than one method and I can’t see any code that obviously is repeated. I can see some terrible variable names. Note to future self don’t use tmp676_674!

Assuming that I wrote this in 2004 what would I have been doing then? It was before I started working in IT. (Hard to imagine I know!) It may even have been before I started living with Keith, before he recruited me for my first IT role. I think I was probably working as an administrator for Defra at this point.

If we put 2004 in technical terms, it was before I joined facebook, Office 2003 and XP would have been installed on my PC, and probably felt brand new.