On Saturday 3rd December I attended DDD North . It is a community run conference for Developers (the D’s stand for Developer) and I had a fab time there. Many conferences are going online which is great, however there is nothing quite like chatting over coffee or lunch with fellow Developers about the tech you are learning about, this was probably my favourite thing about the conference. 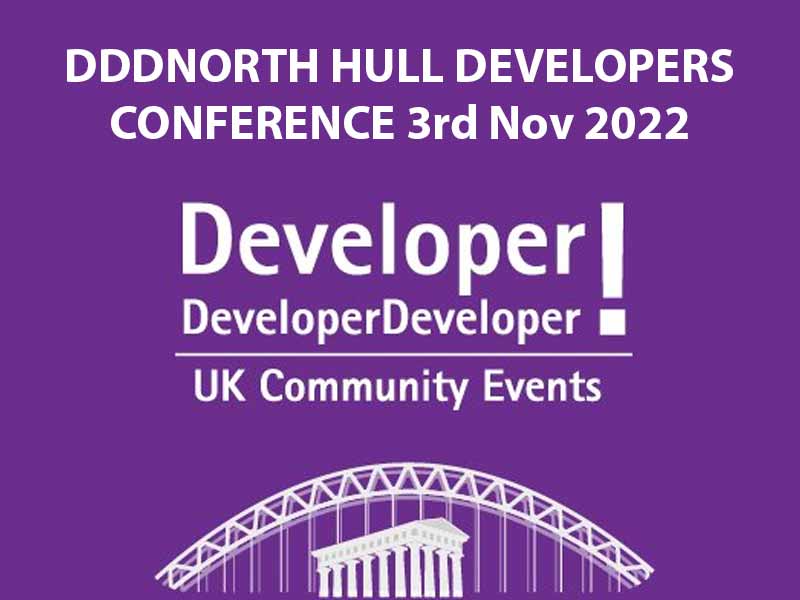 The first talk I attended was ‘.Net Minimal APIs’ by Kevin Smith . Kevin runs .Net user groups in York and Sheffield so I have heard him speak before. He went through some of the features of minimal APIs. I have briefly experimented with them in .Net 6, however from the sound of things the tech is much improved in .Net 7, with lots of improvements, so this is something I want to give another try.

During the coffee break I managed to have a quick conversation with Nick Chapsas . Nick has a YouTube channel that my colleagues at work have been sharing during our weekly knowledge share sessions. It was great to chat with someone that I have been watching on YouTube.

The second talk was ‘When microservices go bad’ by Andy Clark . This talk was a discussion of the different ways you can use Polly , Carl Franklin of .NetRocks fame has mentioned Polly a few times on the show, so this was a good talk to explain the different ways it can be used.

The third talk was ‘Don’t put your messages in a bottle; Implement messaging patterns’ by Eldert Grootenboer , he should have been joined by Olena Borzenko however she was unable to travel (didn’t catch exactly why, I think she was from Ukraine or working in Ukraine and Visa’s from that part of the world are a problem at the moment). This was a talk all about message queues and the patterns and practises you should implement. I don’t know much about queues, having only recently started using AWS SQS messages recently so this was useful to put that work into context. The slides from this talk are available here

Lunch was next and the food was excellent. I found myself sitting with Jamie Taylor (from the Tabs and Spaces podcast), Craig Pickles , Chris Sainty and a few others. There was a fascinating discussion on Blazor, .Net and how Microsoft introduces new stuff. Really appreciate being able to listen in on such an interesting discussion.

The fourth talk was ‘Why don’t people seem to be able to diagnose problems these days?’ by Richard Fennell . This was a fascinating walk through computer history and the challenges of finding where the problem is. The slides from this talk are available here

The last talk was ‘Empathy, Sympathy, and Compassion’ by Jamie Taylor who I had met at lunch. This was a fascinating look at how we place barriers between ourselves as Developers and the users of the software. It expanded into ethics, code of conduct and doing good. The slides from this talk are available here

It was a great event so thank you DDD North for all your hard work, I look forward to the next one. I have lots to go away and think about.